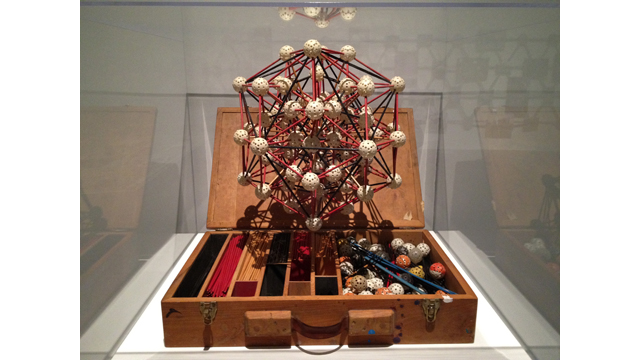 A (not so brief) History of Zometool

The mathematical universe lives all around us. New ideas, forms, and methods exist everywhere, ready to be introduced into human culture. It just takes someone who can see what is there and make something out of it.

Steve Baer was one of those people.

Baer was fascinated with the dome geometry introduced by architect R. Buckminster Fuller. In the early 60’s, he was an occasional guest at an experimental community, Drop City, near Trinidad, CO. The founders of Drop City included “drop artists” Clark Richert, and Gene and Jo Ann Bernofsky.

In planning the community, the founders discovered that domes have their limitations as living quarters. They must have circular floors. There are many edges and joints, with many different edge lengths. They are fairly complicated to construct, and changing their shape to fit specific needs upsets their structural integrity.

Having become fascinated with polyhedra after seeing semi-regular figures his wife constructed with a child’s toy while they lived in Zurich, Baer invented a new system, which could build a vast array of shapes with a much smaller inventory of parts. The word Zome was coined by Steve Durkee of the Lama Foundation, which first published Baer’s Dome Cookbook, and Steve Baer. Domes could be designed with Zome geometry (not true geodesics, but similar), as well as homes with more fanciful shapes. A real strength of Zome constructions is the relative ease with which additions can be made.

The small Zome that resided at Drop City is gone now, along with the rest of the community structures, but Baer’s current house in Corrales, NM was built using the Zome concept.

Zomeworks, incorporated in 1969, raised capital to make playground climbers, structures and the Zometoy modeling sets. These were developed and patented in 1969 and 1970 by Zomeworks Corporation and Stanley Marsh III of Amarillo, Texas. Zometoy used plastic ball joints and wooden dowel struts. It was demonstrated at the New York Toy Fair in 1971. Zometoy made the same forms as the current Zometool System. However, it was relatively crude and inconvenient.

In 1979 destiny unites the brilliance of Marc Pelletier and Paul Hildebrandt.

Marc Pelletier, an avid geometer and fan of Steve Baer’s work, and Paul Hildebrandt, who was very interested in developing alternative housing structures, find a unique balance of talents that lead to developing the “impossible” connector ball, the marvel behind the Zome tool system.

With a goal of making Zome geometry accessible even to 6 year olds, they set out to design and develop a toy that would ignite the imaginations of our future architects, scientists and engineers. Knowing that the geometry was so revolutionary that it could change the shape of our world, Pelletier and Hildebrandt began their work in Boulder, Colorado.

It took them over ten years. They developed an ingenious design for a connector ball. They designed a set of struts in specific shapes and colors that both children and adults could easily handle. At that point, they had to find someone who would buy the idea and manufacture the toy.

The toy makers who saw it smiled and said nobody could ever mold the connector. Hildebrandt and Pelletier took their design to toolmakers all over the world. Even in Germany and Japan, toolmakers just shook their heads. In the USA, nobody would touch it.

Knowing the importance of their work, Hildebrandt and Pelletier decided to learn injection molding for themselves.

In 1988, Bob Nickerson takes on the challenge.

Master machinist Bob Nickerson, in Denver, Colorado, saw their design and opened the window of opportunity by telling Pelletier and Hildebrandt that he believed he could machine the “impossible” tool. Hope restored, Hildebrandt and Pelletier founded BioCrystal, Inc. (which would become Zometool in 1997) to raise capital and manufacture Zometool. Over a period of several years’ work machining the parts for the most complicated plastic injection mold ever designed, and with the donation of an ancient injection molding machine from the University of Colorado, they were finally ready to put it all together and do the first test run.

The first ball came out perfect, the very first time. A revolutionary intellectual technology was born. The date was April 1, 1992.

For some time, Zometool remained a bit of a secret from the general public. The product spoke for itself, however, among mathematicians and research scientists, who could immediately see uses for Zometool in their work. The system, with math based on Golden Section proportions and 2-, 3-, and 5-fold symmetries, applies to an amazing variety of scientific pursuits.

NASA started using the tool for AIDS virus research in space, and for a space station project. After the discovery of quasicrystals, for which Dan Shechtman was awarded the 2011 Nobel Prize in Chemistry, both Shechtman and 2-time Nobel laureate Linus Pauling used Zometool during the debate over whether quasicrystals were real Zometool was and still is the only system capable of modeling quasicrystals.  Mathematicians such as Roger Penrose of Oxford University and John Conway of Princeton University use Zometool to model complex geometric forms.

After publishing his “An Exceptionally Simple Theory of Everything” in 2007, physicist Garret Lisi would sometimes use Zometool to illustrate the complex 8-dimensional structure (the E8) underpinning his theory which combines particle physics with Einstein's theory of gravitation.

None of which made Zometool any less fun for kids.

Linking the geometry of the ancient Greeks to quantum physics, from inner space to outer space, Zometool is positioned to be the basis of spatial interpretation for the new millennium.