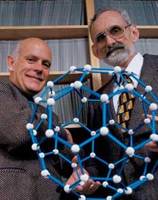 The Buckyball was first observed on September 2nd, 1984.

The properties of the molecule were surprising and its structure a mystery. Close to midnight on September 9th, Smalley hit on the geometric shape most likely to embody their discovery; the truncated icosahedron.

In 1996 Smalley, Kroto, and Curl won the Nobel Prize in Chemistry. The presenter of the Nobel noted that the discovery of fullerenes has implications for all the natural sciences. Born of astronomy, it has expanded knowledge of chemistry and physics. Fullerenes have been found in geological formations and in sooty flames. Possible future uses include in antibiotics and as armor.

Read a fuller account of the discovery from the American Chemical Society: http://www.acs.org/content/acs/en/education/whatischemistry/landmarks/fullerenes.html 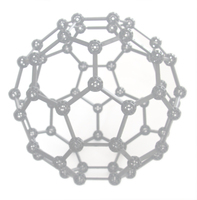 To commemorate this event, we're releasing a limited number of beautiful all-black buckyballs.